Leaders from our neighboring countries even visited the affected areas with teary eyes and pledged to rebuild Nepal. Whereas, our Nepali leaders were busy making the already bureaucratic system even more bureaucratic and increasingly difficulty for relief efforts. Emergency relief items started arriving at the international airport in Kathmandu and the government in their efforts to centralize the aid coming in from all around the world created a bureaucratic system of collection where everything had to pass through the Home Ministry. Any relief items that had arrived in Kathmandu had to go into a central collection warehouse, which would be responsible for the distribution. This centralized mechanism might have worked if the systems were functioning prior to the disaster. However, the instable political situation and weak governance became ever more volatile after the earthquake.

In this emergency situation, such bureaucratic regulations are making relief work even harder. Not only are government efforts struggling on the ground, they are not making it easier for others to reach out. In addition to trying to control relief items in the airport, the government also put restrictive requirements on funds coming in to local NGOs working on the ground. All the relief funds coming from various international donors agencies would first have to be deposited in the Prime Minister’s earthquake relief fund prior to the NGO gaining access to it. “Why?” has been the question a number of Nepalese in Nepal and all around the world keep asking themselves and posting on social media.

This was a natural and political fall of our country.

But then the Nepalese people on ground zero rose with such force that many individuals/groups of people started mobilizing themselves and trying to reach the most affected areas. This I would say was the rise of new Nepal, a more united Nepal. People from all backgrounds have come to the streets and started helping those in need. Social media has today become a prime source of mobilization and coordination of relief action. Many Nepalese overseas have also come together and started collecting relief funds as well as emergency items to send back home.

I am writing this short description of the situation from outside the country and all the time I feel guilty for not only not being there with my family and friends but for still having a normal life when so much has changed for so many of my dear Nepalese. Hence I have directed my efforts to do as much as I could from where I am.

This has direct implications on our research project as one of the case studies also included two world heritage sites in Kathmandu. Our research primarily focuses on understanding world heritage and rights. Both the selected sites have been severely affected, and so has local inhabitants and religious practitioners. How does one begin to comprehend the levels of physical, spatial as well as psychological damage in the aftermath of a disaster? The physical structure which in some cases could have been the only means of access to rights is no longer physically present. Therefore how does one reclaim this access to rights? This calls for the need for careful research and dialogue with policy makers to secure a long-term, sustainable intervention linking world heritage and rights in the post-earthquake recovery.

Pranita Shrestha can be contacted through: shrestha.pranita@gmail.com
For general information about the research contact: Peter Larsen: peter.larsen@unilu.ch

1 Special thanks to my husband Dr. Bibek Dhoj Thapa for his kind assistance and motivation. I would also like to acknowledge the support and feedback from Dr. Peter Larsen and Helena Ziherl 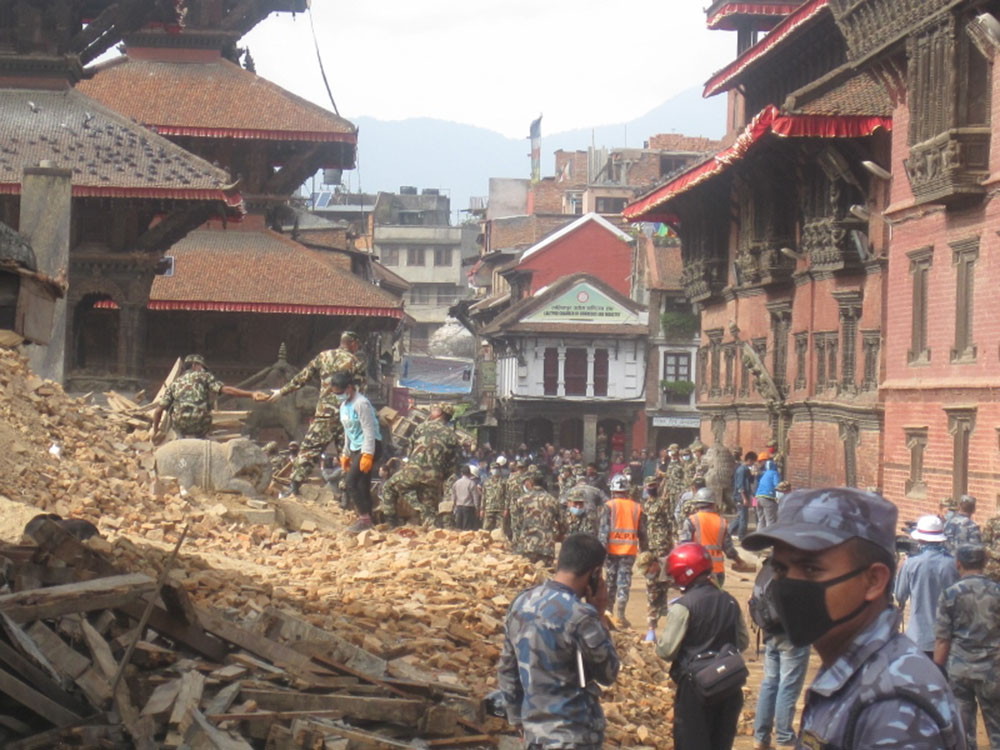 1 thought on “The fall and rise of Nepal: challenges of rebuilding after the earthquake”